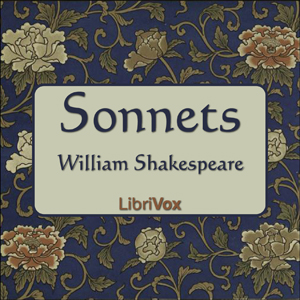 LibriVox recording of the Sonnets by William Shakespeare. Read by Elizabeth Klett.

Shakespeare's sequence of 154 sonnets deals with such themes as love, time, death, immortality, lust, and sex. The poems follow but also depart from the Petrarchan tradition of sonnets written by a frustrated male lover to an unattainable idealized female beloved. Shakespeare's sonnets are addressed to both male and female lovers: the androgynous "young man" and the alluring yet dangerously sexual "dark lady." (Summary by Elizabeth Klett)

Reviewer: Timothy Ferguson - favoritefavoritefavoritefavorite - July 23, 2013
Subject: Try them one at a time, not as a full read through.
I did not enjoy them, and I hate that. I’m continually harping on about how people should enjoy poetry more, and so when the book club pulls out the a celebrity like William, I thought I’d be able to just wallow in the fantasticness of his words, and then evangelise him afterward. No such luck.

I can see he’s a talented poet, and he has a skilled turn of phrase. I can see that I have hamstrung his work because I’ve listened to the sonnets in a steady stream, rather than one at a time, separated by weeks or days. Nonetheless, I couldn’t enjoy them, because their matter is so slight, and so repetitive.

They are love poems, and so, of course, there’s a tremendous amount of flattery. It’s not interesting flattery however. Apparently his dark lady is quite beautiful. He mentions that a lot. She seems to lack any other particular recommendation. His fair youth, being male, would have shocked the wowsers of later ages a bit, but it would not have generated interest in his time, and does not in ours. (Aside, John Barrowman got married yesterday! Doctor Who fans rejoice!). The youth’s only property appears to be that he’s better than a woman, following that line of gay misogyny so familiar in the historical works of pro-patriarchal bisexuals, but at the same time, Shakespeare wishes he was a woman in one of the sonnets, which brings his bisexuality into question.

Shakespeare also mentions himself a great deal, and demands people do things for him, like make him feel younger. If you were the flattered youth and received the sonnet telling you not to age, for if you are young, then how can your admirer be old, what precisely are you meant to think? Presumably you are meant to think he’s shallow and vapid and he is going to say to you the terrible things he says about aged people when you, too, inevitably fail to meet his injunction to be immortal.

Some of the later sonnets, which are more somber and have a finer grasp of metaphor, emerge from the blizzard as good, but the overall effect, for me, was that I listened to the first thirty minutes out of interest, and the rest out of, well, not so much duty as inertia. I’m looking forward to the discussion, because clearly many people with excellent taste have been deeply moved by these works, and I’m clearly missing out on something.

The reading is brilliant, because Elizabeth Klett is a great reader, but I can’t find a group to recommend this to. Even if you are a love-lorn teen, then a guy commenting repeatedly on how you look, rather than who you are, must grow wearying.